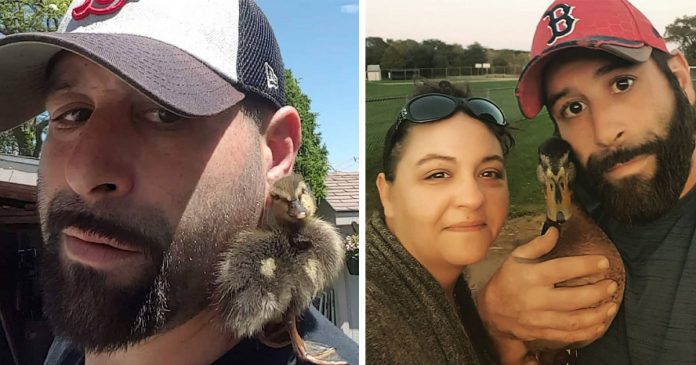 Steven Thibeault is a Nahant, Massachusetts-based artist. He owns and operates an apartment complex, and one day while visiting the property, he noticed a small duck battling for his life in the on-site pool; he quickly grabbed him, but was unable to return him to his mother. Because the duck was too tiny to live on its own, Steven decided to take it home with him and name it ‘Cheerio.’

Both of them formed a friendship from that point forward. The father thought he could release it back into the wild, but the rescued duckling had no desire to leave his new family. Cheerio goes for a walk in the water while Stiven works, but he always returns to the person who saved him.

Steven is overjoyed with Cheerio, telling The Dodo:

“He understands my routine quite well, so we go to work, he spends most of the day outside, and we go home after work. He has a fantastic social life, and he’s spent time with other ducks, which makes me happy.” However, in the end, he picks me. That might change in the future, but it is entirely dependent on him.

Steven attempts to give Cheerio the freedom to come and go as he pleases, but the duck clearly adores his foster father and comes to him frequently. Everyone in the apartment complex likes the bird and feeds it whenever they see it; he has become something of a celebrity.

Cheerio loves swimming and coming to the beach, and he has a lot of duck friends. His father enjoys seeing him having fun and play in the water.

“He gets along swimmingly with the other ducks, particularly the males.» At this stage in his life, he’s a little shy among women, but I’m hoping that improves. It also hangs out with other ducks and geese who spend their winters in Nahant, such as eider ducks, wild ducks, and geese. He also has a few seagull pals.”

You can see a video of Cheerio on the beach :

This man could not have imagined having an unconditional buddy when he rescued Cheerio a long time ago. This young duck is content with his human family, and for the time being, he likes alternating his time between nature and Steven.