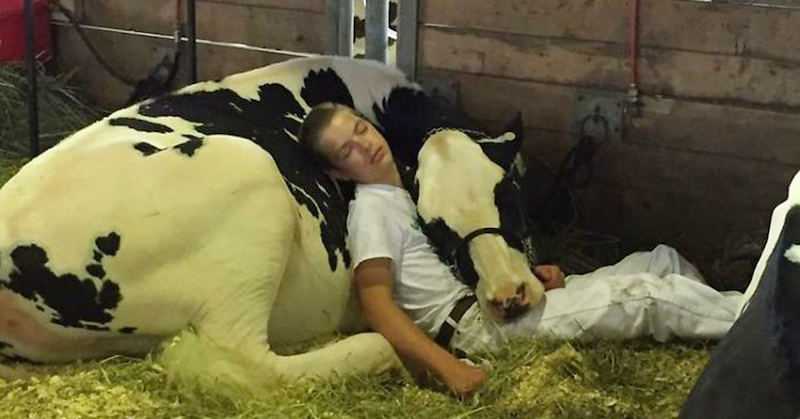 During the Iowa State Fair’s young dairy cattle exhibition, 15-year-old Iowan Mitchell Miner and his faithful cow Audri were pictured resting together. It’s one of numerous tales of human-animal relationships, but this one of a child and a cow demonstrates just how powerful such ties can be when we take the time to get to know an animal.

A blue ribbon was not won, but Mitchell and Audri won the hearts of millions of people via this beautiful photograph, which quickly went viral on the internet and attracted the attention of major media outlets like CBS News and Fox, giving us a glimpse into the lives of proud, hard-working Midwesterners.

As a result of the weeks of training leading up to the tournament, Mitchell and Audri got up at 3 am on the day of the competition to get ready. “Mitchell Miner and his cow friend Audri had spent weeks practicing for the event and after several days of these early wake-up calls, boy and cow were fairly tired out,” according to the Des Moines Register.

They decided to take a sleep after the event (with Audri taking 5th place out of 7 participants!). His father shot a photo that, regardless of whether you were raised in the city or on the farm, instantly tugs at your emotions.

Mitchell was pleased of all of the hard work they both put into taking care of Audri, even if Audri didn’t win the top award as Mitchell had anticipated.

The Des Moines Register wondered, “What is it about the photo that affected people?” in reaction to the viral response to this fascinating snapshot.

They came up with a few ideas:

“It brought back memories for individuals of growing up on a farm and the love and care they had for their animals while rearing them for county fairs and 4-H shows,” says one participant.